The (short) history of the Penis 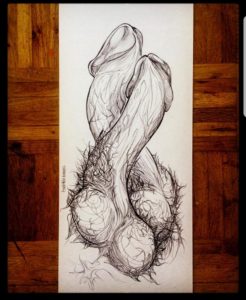 The penis has been enormously influential in shaping our beliefs and the cultural history of the world. Revered and feared in societies across the world, its name 'penis' comes from the Latin, meaning ‘tail’ and is the ultimate symbol of masculinity worldwide. Temples in India were once erected (no pun intended) in their honor, modern skyscrapers resemble their glory, while early Christians went to great lengths (again, no pun intended) to hide this gruesome anatomy from our gaze. Ancient Egyptians believed the universe was created from the ejaculate of Atum’s sacred masturbation, while early Christians believed that a solo ejaculation meant one would lose his soul - through the eye of the penis - no less.
These days the hard cock is perceived as a symbol of desire, feared as a weapon of domination and is the reason men spend billions annually on medication to attain sustainable hardness. Young boys in ancient Rome were given one to wear in a locket around their neck called a ‘fascinum’. Today our more common reference of this word is in ‘fascination’, which we still associate with anything arousing…though more commonly of the mind.
Freud told us early in the 20th century that women were envious of it, presumably not realizing the penis and the clitoris are in many ways the very same organ. These days the ethics of circumcision are still debated, while penis size remains a constant source of speculation and shame.
In art, the penis has been depicted by ancient Egyptians as enormous, while in ancient India a source of great power. Early Greek art depicted penises as tiny and delicate (fertility Gods excepted), presumably as a marker of civilization and higher social status.
Regardless of how they come (lol), penises today bring much joy and pleasure to their owners and the people who love them. Learn more about cocks in "The Atlas of Erotic Anatomy & Arousal". Artwork by the amazing @marian_kretschmer